A CEO Whose Business Lets Him Sleep at Night 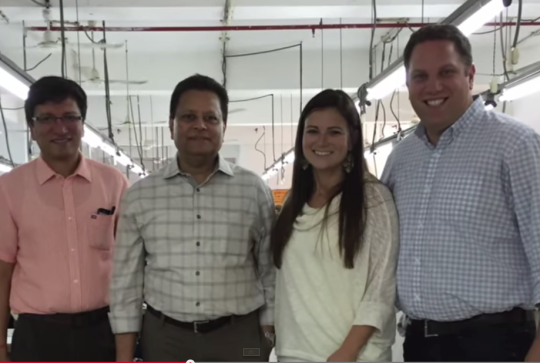 Scott Tannen stumbled on a business idea while helping his wife Missy shop for new bed linens. Curious about the truth behind “Egyptian cotton” and thread-count claims on packaging, he started investigating the textiles industry. What he discovered inspired the couple to start an online organic bedding business.

This isn’t the first company Tannen has built. After finding early success in the video gaming industry, he turned his attention to angel investing and startup advising. His experience and financial position gave Boll & Branch an advantage out of the gate. But Tannen says he also had a lot to learn.

“I started with the idea, ‘Let’s make bedding easier to buy and cut out the middle man to sell direct to consumers online—the way Warby Parker does with glasses,” he says.

But Tannen quickly realized he did not want to source from the same linens vendors that retailers do. “It’s frighteningly difficult to find an ethically produced product,” he says, citing rampant problems with child labor and unsafe practices in the industry worldwide. “Even in the U.S., a lot of factories have deplorable conditions,” he says. What’s more, he learned, in China and Pakistan, where most so-called Egyptian cotton is grown, the life expectancy of a farm worker is 35 years old. Having recently lost his mother to pancreatic cancer, unhealthy work conditions “were something I did not want to be a part of,” he says.

So Tannen and his wife tapped Fair Trade USA for help setting up their own supply chain. They traveled to India to find organic farm cooperatives, gins, weaving houses, and dye factories they could work with to produce sateen-weave bedding in a 300 single-ply thread count.

While Tannen says it’s unheard of for U.S. manufacturers to pay fair rates for cotton in developing countries, his company chooses to pay 30 percent above commodity cost. Boll & Branch also does good by putting money into the schools that its 928 farmers’ children attend and contributing a percent of sales to efforts to end the human trafficking. “It’s about helping to improve their lives,” Tannen says. “The more we sell the more lives we will change.”

His philosophy is that “luxury products are supposed to feel great,” to purchase as well as to use. “Touch and performance feels great, but everything else we do is meant to feel good as well,” he says. “You know you’re not getting ripped off. We’re transparent with our markups. You feel good about buying from our company.”

The approach seems to be working. The company did nearly $1.75 million in sales in its first year, and business is booming. “We’ve sold more sheets in the last month than we did in our first 6 months in business,” Tannen says, adding that the sheets, priced at upwards of $200 per set online, are of a quality that would demand over $600 if sold in stores. But he believes consumers shouldn’t pay any more than the 50 percent markup available online. “We’d rather make an impact than a billion dollars,” he says.

As much as Boll & Branch has impacted the people it works with, the business has also changed the Tannens’ lives. A video Missy recorded of their last trip to India shows the warm relationships the couple has developed with their workforce and partners there. “We have 250 factory workers. My kids have Skyped with their kids. I truly think of them as part of the Boll & Branch team,” he says. “Our entire team is so motivated. We are working for the 900 farmers out there.”

A sales slogan he wrote sums up the vision: “When you change your sheets, you can change everything.”