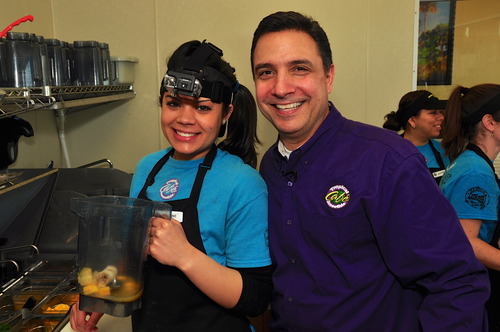 Sales at Tropical Smoothie Café have climbed consistently since Mike Rotondo came on board as CEO in 2008. The fast-food chain’s 421 stores saw an average 11 percent increase in sales last year and he projects 15 percent more in sales this year, not to mention the addition of 90 stores by year end.

What’s behind Rotondo’s Midas touch? Don’t wait for a slowdown to implement new ideas, he says. Innovate when sales are up. Most brands react to slow sales with changes in products or processes, but Rotondo says they have it backwards.

Customers are happy? Change up the menu, introduce unexpected flavors, add bold ingredients. It might seem counterintuitive—and Rotondo confesses he has gotten pushback from several of his 290 franchise owners who don’t want to invest in change when their stores are doing just fine. “Mike, why can’t you just leave the menu alone?” he says they ask him. But he has been proven right enough times now that he has gained their trust.

Rotondo, who previously held leadership roles at Wendy’s, HoneyBaked Ham, and Arby’s, says his approach is backed up by the mathematical function known as the Sigmoid curve. “The theory says all businesses have this cycle: your business is improving, going well; competition comes in; your business stagnates and then starts to drop off,” he says.

That last phase, he says, is when most companies try to change or innovate or put new programs in place. “But when you’re heading down it’s hard to change, especially in the franchise environment,“ he says. "If your franchisees are not making money, it’s hard to get them to do things differently.”

Rotondo says that when a business is in that first cycle of an S curve, it’s up to a leader to anticipate what’s coming and make changes while things are good. “There’s the time when you institute this change and you start to go back up again, but there’s a time when everyone is asking, “Why are we changing? What are you doing?” He calls that period “chaos” and says, “my job is to think past knowing that we’re doing good, and to think of possible competition, market intrusions, and changing costs.”

Granted, it’s tough to implement such an approach if the people you’re leading don’t believe in you, Rotondo says. “They’re constantly going to be challenging your leadership. But once you do one of these and it works, people go, ‘OK, he’s right.’ You’re still going to have periods of chaos, but once you get one under your belt, people trust you.”

What’s an example of a change he implemented at Tropical Smoothie Café? “Sales were going good and we decided to increase our ad spend,” Rotondo says. “Our franchisee’s agreement states that we can increase their ad spend by 2 percent. But the franchisees are saying, ‘We had a good hear in 2013, We don’t want to spend more on advertising.’ People were concerned. But we went up 11.5 percent in same-store sales in 2014, and system sales were up 25 percent. In 2015, we still have great results coming. It was something we knew we had to do to be competitive, and the results have more than proved it.”

Rotondo says he was motivated by what he saw happening in the competitive landscape for the 17-year-old business. “Our motto is ‘Eat better. Feel better.’ Now everybody is trying to reinvent themselves to be healthy or put smoothies on their menu. This space is getting more and more crowded every day. We have to get out in front of it, to be as aggressive as we can be before we hit that plateau.”

Another aggressive change Rotondo implemented was informed by the obstacles in the way of his team members who wanted to grow from single-unit to multiple-unit franchise owners: They couldn’t get financing. “We said, ‘What if we start our own financing program?’ Not a lot of companies our size do that. We’ve now committed $3 million in funds through our financing program to franchisees.”

“We’re always looking for ways to improve,” Rotondo says. “It’s not just one twist of the Rubix Cube that solves the puzzle.”