6 Things Farming Taught Me About Entrepreneurship 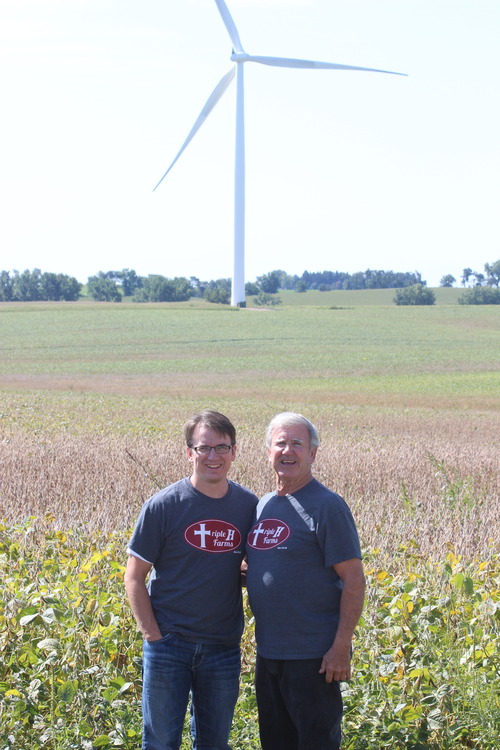 Tim Handorf is one of five entrepreneurially minded guys who left the software company BigMachines two years ago to start a dotcom that crowdsources business software reviews. We reported on their business, G2 Crowd, in Profit Minded last week. But in our interview with Handorf, another interesting angle emerged.

Handorf says his passion for running a business was fueled by a childhood working on his father’s farm in the small town of Gladbrook, Iowa, where there were 14 boys and 5 girls in his elementary school class. The senior Handorf, with help from Tim Handorf’s brother, still grows corn and soybeans, and raises cattle and pigs there.

“I grew up with a strong work ethic on the farm, but my father didn’t raise me to be a farmer,” says Handorf, pictured here with his father on the family farm. “He raised me to be an entrepreneur. Every farmer out there is an entrepreneur. Farmers are some of most creative and versatile people I know, and without that entrepreneurial spirit, they won’t survive.”

Handorf offered this list of six key traits of farmers that he believes translate to success in business:

1. Versatility. “When you’re on the farm you’re a veterinarian, a commodity broker, a mechanic, and a sales person. You have to know a little about everything to get the job done. Entrepreneurship is the same way,” Handorf says. “When you start a business, you’re a product manager, an accountant, and a marketer, and you’ve got to do what it takes to get the job done. Farming demands working late nights and early mornings,” he says. “Starting a company is not for the faint of heart either. You have to love what you’re doing and love working to be successful at it.”

2. Cost consciousness. “The term ‘bootstrapping’ originated in farming. If you don’t spend your money wisely in agriculture, you’re probably bankrupt,” says Handorf. “My experience in entrepreneurship has been the same. You can’t hoard your money, but you need to invest it wisely and get a good return on every investment. A little bit of common sense goes a long way.”

3. Creativity and ingenuity. “A lot of times on the farm you have problems to solve and little resources for solving them. I grew up as student of agricultural engineering—learning to solve problems by jerry rigging with wire and duct tape. Go to any given farm and you’ll see random contraptions solving problems in their own way with things that aren’t on the market,” Handorf says. “This is definitely a trait I have found valuable in entrepreneurship. I’m not creating machinery, but every day there’s a problem that probably hasn’t been solved before and we have to creatively come up with a solution.”

4. Efficiency. “When you have a lot of work to do, you have to plan, prioritize, and think ahead. I remember a story about my grandfather. When he was hiring a new farmhand, he’d ask him to go for a drive. He liked to see if the prospective hire would take his keys out of his pocket before they got to the car. He wanted to hire the person who was thinking ahead. He wanted the most efficient man possible,” Handorf says.

“When I’m hiring, I watch how people do things. I don’t ask them to drive, but I have asked people to go out for coffee or ice cream, and I watch how they interact and to see if they can talk to me and think at the same time.”

5. Strong relationships. “Growing up in a rural environment, more than anything you count on deep relationships and working with people to get the job done. Even when you’re sick, the animals need to be fed. You have to call on friends and family to do that, so you are building deep relationships and trust among people,” Handorf says. “A lot about how my partners and the people on our team at G2 Crowd have built our team and grown with each other is a tribute to my rural community upbringing.”

6. Optimism. “Entrepreneurs in general are optimists. They see a problem and believe they can solve it in a better way. You’re always looking for the best outcome, the positive side,” Handorf says. “I grew up in the tornado belt where, when the sirens go off, you take cover in fear of a tornado wiping you out. Afterwards, we would go out and check the crops.

“One time we were driving along and we saw our neighbor’s house destroyed, our grain silos blown down the road, and our crops destroyed by the hail. My Dad got out of the truck, pulled out a five-pound bucket, and started shoveling hail into it. ‘There’s not a lot we can do right now,’ he said, ‘but we could go make ice cream.’ He knew how to see the bright side in a bad situation.”