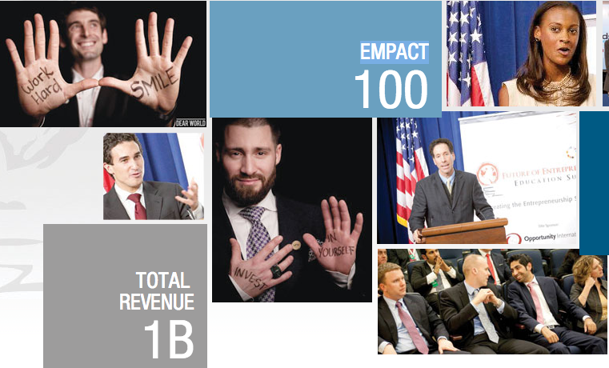 A platform for crowdfunding your medical expenses, a healthy foods vending machine company, and a no-contract wireless phone company approaching $100 million in revenues are among the more than 306 entrepreneurial ventures that will be celebrated at the United Nations Headquarters in New York City this week. The third annual Empact Showcase, October 24-25, is the brainchild of 30-year-old entrepreneurs Michael Simmons and Sheena Lindahl who call the event “the largest showcase of the best companies founded by young entrepreneurs.”

To apply to be featured in the showcase, entrepreneurs must be age 35 or under, with a business that generates revenues of at least $100,000. Simmons says the average annual revenues of companies featured this year are $4.5 million. The event is mainly about bringing young entrepreneurs together to network, share challenges, and “serve as consultants and champions for each other’s growth,” but it will also honor the top 100 business founders in the room.

But Simmons says the event is less awards ceremony than pep rally. “We help tell the stories of all these entrepreneurs cumulatively so people can relate to them. Part of the focus is on relationship building. It’s an amazing group of young entrepreneurs, and there is value in connecting them to each other.”

Among the many impressive enterprises in the 2013 Empact 100 are these five:

Human Healthy Vending is a franchisor of high-tech and eco-friendly healthy vending machine businesses. Founder Sean Kelly, 30, has placed 1,500 machines and nearly 200 franchisees across the nation, Puerto Rico, and Canada, since starting the company in 2008.

GSM Nation is a company started three years ago by Ahmed Khattak, now 28, and Junaid Shams, 27, to sell no-contract wireless service plans for consumers who don’t want to be locked in a two year contract. The idea came through Khattak’s frustration at not being able to get a phone to call his parents after arriving in the U.S. to attend college. He and Shams, who just finished medical school, expect to generate $100 million in revenue this year.

Tom Szaky was 19 in 2001 when he started TerraCycle to sell fertilizer in used bottles. Two years later he expanded to capitalize on the economic value in trash by offering free collection systems in which individuals or organizations could collect a specific, unconventional waste stream (such as cosmetic packaging or flip flops) and use prepaid shipping labels to send it to TerraCycle for upcycling or recycling. To date, TerraCycle has recycled over 2.5 billion pieces of waste and donated $7 million to charities.

Alyssa Rapp founded Bottlenotes after earning an MBA from Stanford University seven years ago. At 35, she runs a new media company dedicated to educating and entertaining wine enthusiasts. Her Daily Sip newsletter has 500,000 email and Facebook subscribers, and she offers interactive events, social media platforms, and iPhone apps for wine lovers.

For more, see the list of all 306 Empact Showcase companies or a YouTube video about the event.