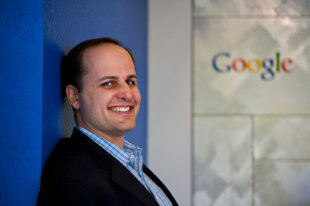 Laszlo Bock is the head of Google’s famed People Department.

Google’s People Department (nicknamed POPS) is like no other Human Resources team on the planet. The group uses data to try to improve just about every aspect of their employees’ happiness, from pay structures and 401K plans to how long the lunch line should be.

Through its research, the department has uncovered some pretty astonishing insights on human behavior. Such as?

Google founders Larry Page and Sergey Brin originally believed in having a flat organization, where nobody was the boss of anybody. But POPS discovered people were happier and more efficient with the right bosses.

2. Especially If They Are Boring

Believe it or not, POPS discovered that the best bosses were highly-predictable people. Why? Because it created a very predictable culture where employees knew what to expect.

3. People Should Wait 4 Minutes For Their Food

Google found that if people stood in line for lunch for four minutes, they met new people, while not getting overly irritated about the wait.

4. And Their Lunch Tables Should Be Long

Along those lines, Google found that longer lunch tables forced people to sit with other people they didn’t know. Again, these new interactions increased employee happiness.

5. But The Plates Should Be Small

Google also found that if they offered 8-inch plates to go with 12-inch plates in their cafeteria, people would eat smaller, healthier portions.

Google discovered that people valued higher base salaries more than anything else, even bonuses. Many Googlers described the day in 2010 that the company increased salaries by 10 percent as the happiest day at the company.

Google is famous for giving away free food, but every Friday they give away free beer and wine as well, again encouraging employees to interact with each other and increasing overall morale.

Google now gives all of their female employees five months off of paid maternity leave, and they can take it whenever they want: before, after or even years after the birth. That decreased turnover in mothers by 50 percent, and thanks to savings in recruitment cost, was cost neutral.

9. People Are Inspired By Lofty Goals

POPS wanted to increase the amount people were stocking away in their 401K plans, so they asked everyone to contribute $8,000 a year – much higher than what most people were contributing. Many of the workers didn’t contribute that much, but they contributed more than they were previously.

10. People Should Be Interviewed Four Times Before Being Hired

Google has forever been a place where they have put a huge emphasis on hiring the right people, so they used to have very lengthy hiring processes. However, after POPS crunched the numbers, they found that four interviews gave hiring managers good insight into the candidate, with any more than four producing diminishing returns.

The biggest lesson of all. The reason Google has POPS in the first place is because they know the key to their company is hiring the best people and then creating a culture that allows them to blossom.