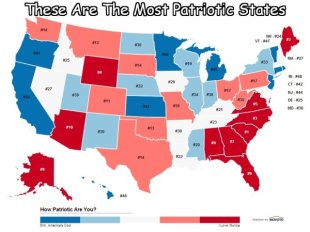 Everyone enjoying the Fourth of July festivities? We know we are.

In this very patriotic time of year, it’s easy to fly our flags high, sing our country’s praises, and fall in love with America all over again. But what about the rest of the year? Well, we know that you’re a diehard patriot, but what about others in your state?

Here at the Movoto Real Estate Blog, we figured that now was the perfect time to look at which states fly their banners highest and sport the red, white, and blue the best. We rounded up some data, compiled a ranking, and found that these were the 10 most patriotic states in the our great nation:

The South definitely represented on this list, and the East in general made a very good showing. But how does one define a patriot? We think we came up with a pretty good method, and you can read all about it in the very next section.

How We Measured Patriotism In The Best Country On Earth

To find out how patriotic each state was, we first made a list of criteria that we considered to be pretty indicative of proud Americans. Those criteria were:

We got this data from sources including the 2012 U.S. Census, the U.S. Department of Veterans Affairs, Google Trends, Facebook, and Wikipedia.

We then ranked each state from one to 50 in each category, with one being the best possible score. We then averaged those scores into one Big Deal Score, with a lower score indicating greater patriotism.

And Texas, before you panic and run out to buy a third American flag, you guys ranked No. 14, so you’re still very patriotic and we salute you.

For now, let’s take a look at the states that did make our top 10, starting with our America-loving winner: South Carolina.

1. South Carolina: Hold Your Head And Your Flag High

The first star-spangled state on our list was South Carolina, home to a lot of Southern and U.S. Pride. Though it didn’t vote as much as many of the other states, this place showed up as patriotic across the rest of the board.

For starters, this place had the most people Googling for American Flags and the seventh most veteran residents per capita. Those veterans also receive the 16th most funding, showing that this state knows how to pay respect to those that worked hard for this country.

It doesn’t hurt that there are plenty of national historical landmarks around here, including USS Yorktown Aircraft Carrier.

2. Maine: Celebrating Freedom Of Speech And Our Heritage

As far as states that know how to celebrate their past and their future, Maine’s got it handled.

With the fourth most historic national landmarks per capita and the highest voter percentage in our top 10, it’s pretty apparent why the Pine Tree State ranked No. 2 overall.

This state is also home to a fair amount of veterans, with about one in 10 locals having served. It’s hard to deny that this state knows how to work for the betterment of our country.

3. North Carolina: You Can Decorate In Red, White, And Blue, Or Decorate Those Who Fought For It

While North Carolina might not have as many veterans as our top two spots, it certainly knows how to treat them well.

The Tar Heel state ranked sixth for veteran funding, helping the nearly one in 10 former soldier population be all they can be.

North Carolina has plenty of people looking for American flags, as well as a high percent of the population that likes the United States on Facebook. Make sure you’re posting that American Flag pic on your Facebook wall this Fourth, North Carolina.

4. Wyoming: Salute A Memorial Or Your Neighbor

It’s you’re looking for a little history and a love of the nation, look no further than Wyoming.

With over 25 percent of the nation liking the United States on Facebook and the second highest number of national historic monuments per capita, Wyoming might be the Equality State, but it’s still better than most other states in the way of national pride.

The state slogan may just single out the lovers part of that, but the voters and vets definitely play a major role.

Because the state is home to some major military hubs like Quantico and Langley AFB, it’s pretty obvious why this state ends up being home to the second most vets in the nation. But the state treats them all well too, and Virginia ranked ninth for veteran funding.

Virginia also ranked seventh for percent of people who voted in the last presidential election and is home to the Pentagon and Monticello.

6. Florida: Showing Pride For The Nation And Its Soldiers

More than four million Floridians on Facebook list the United States as an interest, the seventh most on our list, and a very high percent of the population voted in the last election. No hanging chads this time (we kid, we kid.)

Where this state really shined was in the funding of veterans, a trend that shows national pride, compassion, and an example for many other states to follow.

7. Georgia: A Little Southern Hospitality For Veterans And Facebook

Besides the historically sweet Southern hospitality and tea, Georgia is a pretty sweet state for proud Americans.

Veteran funding was the eighth highest on our list and Facebook Likes for the United States also ranked eighth, so people are ready and willing to show their love for our country.

Georgia is also a peachy place for people who like to fly their flags high, considering there are tons of flag owners around.

8. Alaska: Everyone Loves America, And It’s No Surprise

You might be surprised to learn that this state had the most Facebook Likes for “United States” per capita in our top 10, but it makes sense when you look a little deeper. Why all the homeland love? Well, the other stats here really tell the story.

Alaska has the most national landmarks per capita and the most veterans per capita on our entire list. Nearly one in eight people in Alaska are veterans, so be ready to snap off a salute if you visit.

Alabama is all about supporting the troops and ranked 17th in that category. Where the really amazing numbers were, however, was in people searching for American flag, where the state ranked ninth.

In general, all the scores here were in the top 30 on our list. So, whether you’re a vet, a voter, a history buff, or just a plain ol’ patriot, The Heart of Dixie is for you.

10. Arizona: Getting Some Sunshine And Serious National Pride

It may be No. 10, but Arizona is far from unpatriotic. This place had a ton of local veterans, good funding for our returning soldiers, and a fair number of historical landmarks, to boot.

Plus it’s got all the sunshine you could ever want.

All that culminates in this place having the most Facebook Likes for “United States” per capita in our top 10. People aren’t afraid to show off their grand national pride in the Grand Canyon State, both online and offline.

Some Serious Fireworks For America

So now you know who to go for if you want the best fourth of July celebration, or just patriotic pride year round. If you’re curious where your home state ranked, you can check the map or the chart of all 50 states below. Either way, we’re all patriot’s today, right?

So happy birthday, America. We look forward to that banner waving ‘or the land of the free and the home of the brave for a long time to come. And if you really want to see national pride this holiday, you might want to head over to South Carolina.

This article was syndicated from Business 2 Community: The 10 Most Patriotic States In America (Infographic)