No, Beijing residents are NOT watching fake sunrises on giant TVs because of pollution

Over the weekend, a story that originated on the smut-ridden UK-based Daily Mail went viral among major media outlets across the world. Time, CBS, and the Huffington Post were among the dozens of online news media who published stories about Beijing residents flocking to giant TV screens to see fake sunrises during heavy pollution last week. Most of these stories were accompanied by the same photo of a massive TV screen in Tiananmen Square with a sunrise appearing on it.

Edit @1/22/2014 11:25 a.m.: The Huffington Post has reached out to us noting that their article stated the image on the screen “appeared to be part of an advertising campaign.” While the article is factually correct, we still feel strongly that the story’s headline, photograph, and tone misrepresents the truth behind the images that circulated online.

In truth, that sunrise was probably on the screen for less than 10 seconds at a time, as it was part of an ad for tourism in China’s Shandong province. The ad plays every day throughout the day all year round no matter how bad the pollution is. The photographer simply snapped the photo at the moment when the sunrise appeared. Look closely, and you can even see the Shandong tourism logo in the bottom right corner. The photo was credited to ChinaFotoPress via Getty Images, so a Daily Mail reporter did not take it.

In fact, Daily Mail reporter James Nye, who apparently quoted a traffic coordinator in Beijing, lives in New York City, according to his Twitter profile. CBS went so far as to copy that quote. The quote, in which the man complained about the pollution, originally came from an unrelated Associated Press story published a day earlier. 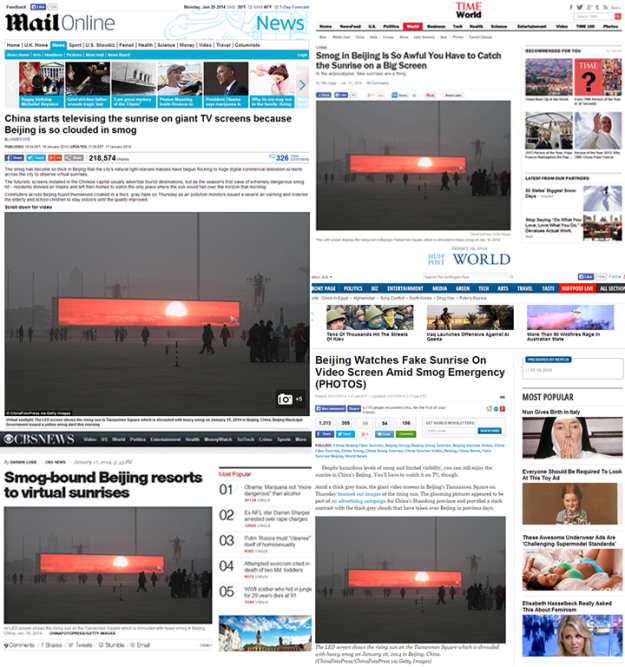 Yes, Beijing is polluted, as we at Tech in Asia have also been critical of, but this story is complete bullshit. International media should be embarrassed for not taking even a moment to second guess the Daily Mail, one of the least reputable news sources in the UK. The Daily Mail article, titled “China starts televising the sunrise on giant TV screens because Beijing is so clouded in smog,” reads:

The smog has become so thick in Beijing that the city’s natural light-starved masses have begun flocking to huge digital commercial television screens across the city to observe virtual sunrises. The futuristic screens installed in the Chinese capital usually advertize tourist destinations, but as the season’s first wave of extremely dangerous smog hit – residents donned air masks and left their homes to watch the only place where the sun would hail over the horizon that morning.

Shame on any media that ran this farce. China has its problems, but they have proven themselves far too eager to criticize just to attract hits from the shock factor. Beijing pollution is bad enough without the added dishonest sensationalism.

Here’s a video from Shandong’s official tourism website similar to the one played in Tiananmen Square (the identical version isn’t online). There are many sunrises in it.


The post No, Beijing residents are NOT watching fake sunrises on giant TVs because of pollution appeared first on Tech in Asia.
More From Aflac
Most Popular
Start a Business
Grow a Business
Small Business Services
Small Business Toolkit »