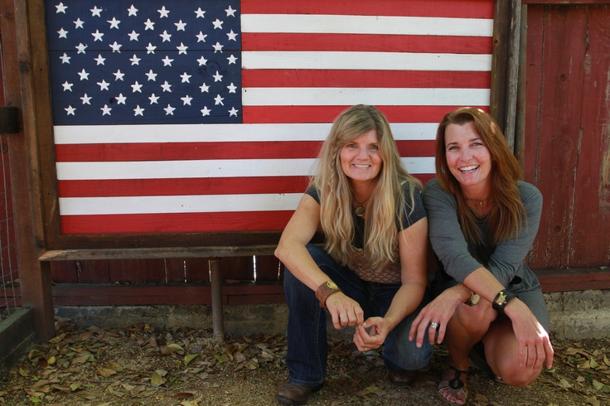 Until about three years ago, Carole Sinclair had a solid career as a Silicon Valley public relations executive. But at heart she has always been a country girl who’d rather be riding a horse than commuting on US 101 to a high-tech office. She was also a self-confessed hoarder of vintage Americana. In 15 years of collecting saddles, typewriters, linens, and other old treasures, she had filled a garage, never quite sure what she would do with it all.

Then, at a formal party several years ago she met Kim Berry, a fellow farm gal disguised as a Nordstrom buyer. The only two women in the room wearing cowboy boots that night, they became instant best friends.

The two decided to team up in an effort to give a new life to Sinclair’s garage full of collectibles. In 2010, they found a vacant cottage where they could host a pop-up vintage sale. The location, in Lafayette, Calif., was ideal: behind a charming nursery garden, adjacent to a 5-star restaurant, and a 15-minute drive from downtown San Francisco.

“We went in with our old loot and decorated the whole place and had a weekend sale,” Sinclair says. Anything they didn’t sell they would put back in the garage.

In two-and-a-half days they brought in $6,500—“above and beyond our expectations,” Sinclair says. So, for nearly a year they hosted sales the second weekend of every month. Each one was different, with unique items and themes, “kind of like the Cirque du Soleil events,” Sinclair says.

Customers lined up out the door. “We hit the heartstrings of a multi-generational customer base that wanted to see a little bit of country sass in their homes,” she says. With her PR savvy, Sinclair also created a buzz for the mini-business with Facebook, Pinterest, and email campaigns.

Pop-up sales were a way to beta-test a full-blown business without committing to retail space rent, and to “see if there was a demand, if the pricing was acceptable, and, of course, if they liked our company name,” she says.

To be sure, the name, Farmyard Darlings, proved as memorable and popular as the products. Within a year, despite the slow economy, they had enough demand and a loyal following, as well as enough cash, to quit their day jobs and turn Farmyard Darlings into a full-fledged retail business.

The nursery landlord gave them a lease on the cottage, and they were soon up and running. Today the women sell some vintage items just as they find them for customers to make creative use of. Other items they upcycle—turning old barnwood into bar carts, antique chicken feeders into centerpieces, or retired rain gutters into hanging planters. They also offer custom sleuthing for specific vintage items, and take special orders for furniture, decorative barn doors, and chicken coops they make from reclaimed wood. Among their most popular items is a large Old Glory painted on fencing.

The Darlings, as they call themselves, drive any of their fleet of old Chevy pickup trucks on their “picking” adventures to farms, barns, and flea markets around the region. And they rely on a team of seven local contractors who design and make patriotic pillows, horseshoe hat racks, cowgirl handbags, and other “farmalicious” goods. The also have book and reality TV show ideas percolating.

Sinclair says starting out as a pop-up shop can be a great way to decide if your retail idea is ready for full-time. Her advice: “Take the time to get your business strategy, plan, financial, and other processes in order. We spent a lot of front-end time on getting things in place—such as how we do our invoicing and our communications—before we were in business so we weren’t doing things on the fly.”

Nearly three years in business now, Farmyard Darlings is profitable. Sinclair says her income doesn’t quite measure up to her former PR-exec salary, but it’s getting there. Regardless, she says, “there’s something priceless about owning your own company.” And best of all, she and her best cowgirl friend are having a boot scootin’ good time.