The Economic History of the World in One Simple Picture 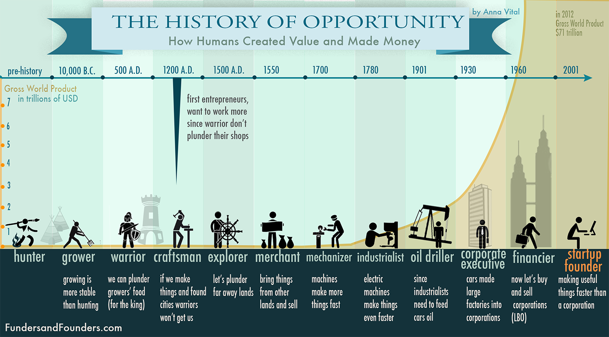 The History of Opportunity via fundersandfounders.com

This infographic from fundersandfounders.com may be a little simplistic – especially because the timeline goes all the way back to pre-history - but it's still a powerful representation of economic history. It should give us all hope for the future – especially since more and more startups are focusing on areas like energy and healthcare and the environment. But is it all true? Where do numbers like these come from?

Back in 1998, J. Bradford DeLong of the Department of Economics at U.C. Berkeley wrote a paper on estimating World GDP from one million BC to the present. It’s a fascinating economic read that looks at the growth in human populations and the connection between human population and economic growth. Most interesting are the points where economic output and production jump and stop being linearly connected to population. Basically these changes occur approximately in 1500 with the growth in trade and the Renaissance and in about 1820 with a steady increase in industrialization as the industrial revolution begins to take hold around the world.

But the DeLong paper was written in 1998 and essentially ends before taking into account the next stage in economic growth driven by computerization and the internet as well as what may eventually be called the startup or entrepreneurial revolution. It is unclear yet whether this is creating lasting value – after all we aren’t really in a position to look back yet and talk about this from a historical perspective. But the economic and GDP numbers would argue for another jump in the current timeframe.

The infographic does a great job of connecting some of this economic theory back to the real world and the evolution of work from hunting as production through the corporate era and perhaps beyond. There is some interesting background on world economic history to connect these together in this Wikipedia article (and it is worth following up on the 35 citations listed).

For a more in-depth look at the way world GDP has changed over time and some of the causes and effects, there is an excellent series of articles in the Atlantic which ends by pointing out that prior to the industrial revolution the average person’s income globally was quite low and didn’t change much over time. Although the reported set of data is quite small in fact, prior to the industrial revolution the highest average income (measured in pounds of wheat) was in Ancient Athens.